These works are tongue in cheek attempts at portraying a person or event using abstract, amoebic like, symbols.  I did the first version in 1976 although I later painted over the canvas and these four pictures are variations on the original painting. 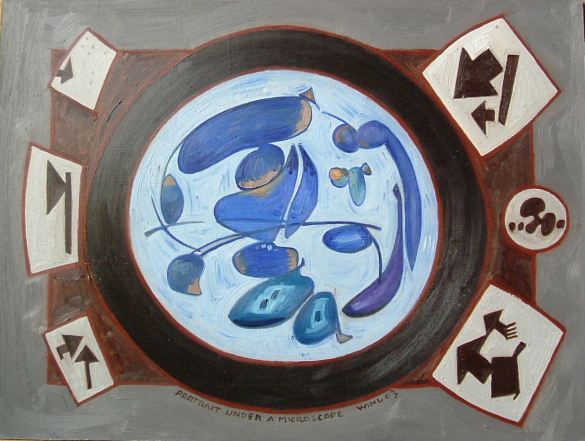 Portrait Under A Microscope

Epic Under A Microscope 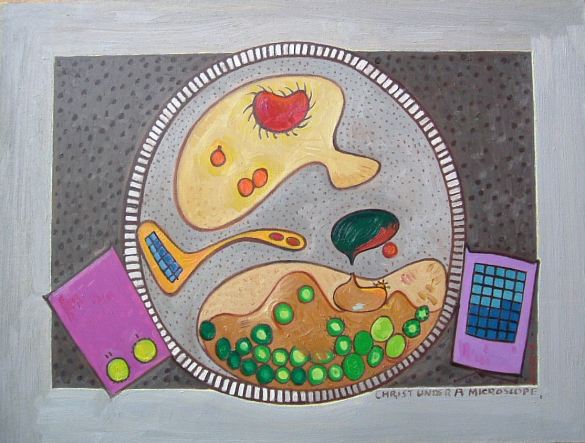 Christ Under A Microscope

God Under A Microscope

Whiteout’ by Jill Rock. From 3rd of December to 9th of January

WHITEOUT – Jill Rock has invited artists, musicians, poets, writers and performers to explore their relationship to WHITE whether it be scientific, social, mythical, psychological, religious or aesthetic. Celebrating that split second of WHITEOUT – the imagination is accessed and the artist has the freedom to improvise.

In times when all points of reference are being eroded things are known by their shadow – the whiter the white the darker the shadow.

Wherever in the world, painting fragments of wood picked up off the ground, Jill Rock tackles the problem of the relationship between object and subject, working where nature, culture and art meet.

“It is as if in the time consuming and concentrated process of finding, cleaning and painting fragments of wood I am attempting to break down the dualism of object and subject to create a unity. In the work Remember the Dance I became fascinated by the fact that as I built up the layers of white gesso the relationships changed as the shadow took on the dominant role.”

Sound Installations by Frederick Lecok, Graham Mackeachan and Cos Chapman

Jill Rock is a London based artist. A sense of place is important to her and she has worked and shown her work worldwide. This summer she has worked in Nunhead Cemetery London, in Rome creating a solo exhibition “Psychogeographical Wanderings in The Caffarella” and at Kurt Schwitter’s Merzbarn in Cumbria. At Hundred Years Gallery she has found a congenial place where artists meet to explore the relationships between art forms.

Here are a handful of photographs taken while hanging the latest Ionist Art Group show at the Paul McPherson Gallery, London.  Proper photos will be taken at the Private View on Saturday.

Everyone is welcome to attend the exhibition viewing – details are given below.

A mixed show of artists who all work in a wide range of media and styles. The show is organised by Gerald Shepherd and consists of highly creative people he has been lucky enough to become friends with throughout the thirty five years of his professional career. As a group they have explored every type of artistic expression and although this particular exhibition focuses on painting, drawing and sculpture it will be an extraordinarily diverse and stimulating exhibition.

The term Ionist Art was coined in the middle Seventies by the artist and writer Gerald Shepherd to cover the work he was producing at the time which lay somewhere in between art and science. In the Eighties he founded the Ionist Art Group to bring together artists and scientists to exchange ideas and collaborate on joint projects. The term has been used in this show to reflect the multifarious interests and sources of inspiration of the participating artists.

Gerald has developed his own totally unique way of working which combines visual art with ideas and processes from the sciences, music and mathematics. The work usually has clearly defined thematic statements followed by an elaborate developmental sequence (he coined the terms Meditative Process Art and earlier Ionist Art to cover this work). The initiating imagery can range from simple and abstract to complex figurative arrangements through which he can explore many of the personal and philosophical issues that concern him. His early work was extremely precise and intricate but since the end of the Nineties he has been exploring freer more spontaneous styles – attempting to create a new landscape and portrait painting tradition in the process.

Manfred started painting in the early Seventies but in the latter part of the decade became disillusioned with this as a means of creative expression and destroyed most of his work. He then went through a highly experimental “anti-art” phase; scribbling on discarded furniture, junk and old toys and exploring a variety of unusual ways of making marks on exhibitable surfaces. Unfortunately most of this work has subsequently been lost. At the beginning of the new century he started painting again, initially repeating the themes and subjects of his earlier works. He invented the nom de plume Simon King to cover what remains of his experimental work (mainly because it rhymed with Wing and a long time before the naturalist and TV presenter of the same name became well known).

Mia is a largely self taught painter of wistful and evocative fantasy paintings, both figurative and semi-abstract. These illustrate her love of animals and the natural world as well as exploring the spiritual and innate aspects of human existence. She works primarily in watercolour and acrylics on paper but uses a wide range of other media and surfaces. As well as producing and showing art throughout the country she is involved with art as therapy and works as an arts and crafts facilitator in a variety of situations.

Meg finished her artistic training at Winchester School of Art and now works in the Tate Gallery in London. She creates art work in a variety of media ranging from conventional easel painting to complex multimedia presentations. She recently discovered some lost cine film from her childhood featuring her late father and has used this for an extensive series of works. This art is both personal and universal, exploring change, development and loss.

Jill had the opportunity of working with Australian aborigine artists in 1997, an event which changed her approach to art making. She has moved from being a painter of geometric abstractions to a painter of objects which she calls “sculpting in colour”. She works with a huge variety of found materials and displays this work both inside and outside of a conventional art gallery environment; often participating in multimedia events with musicians, actors and writers.

Toby, who was involved – along with Gerald Shepherd and Manfred Wing – in the original Ionist Art Group in the Eighties, had exhibited his paintings and drawings widely in the early Nineties before moving to France and working on other art projects as well as renovating houses for a living and bringing up a family. He moved back to the United Kingdom at the beginning of the present decade and started to show his work again, almost immediately receiving very wide acclaim. He was a finalist in the 2012 BP Portrait competition and his work ranges from dynamic strongly painted portraits to landscapes and virtuosic abstracts.

As one of the main paper sizes I have produced huge numbers of A4 drawings but up to now very few A4 easel paintings.  As I accidentally bought some A4 frames I decided to produce what turned out to be a set of eight pictures – all landscapes.

These paintings are all based on photographs I have taken, mostly from a bus travelling through the Wiltshire countryside between Salisbury Plain and the Marlborough Downs.  They are painted in oils on acrylic primed cut panels. 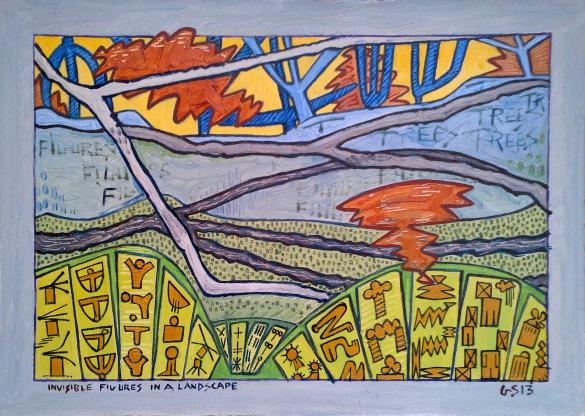 (Invisible) Figures In A Landscape 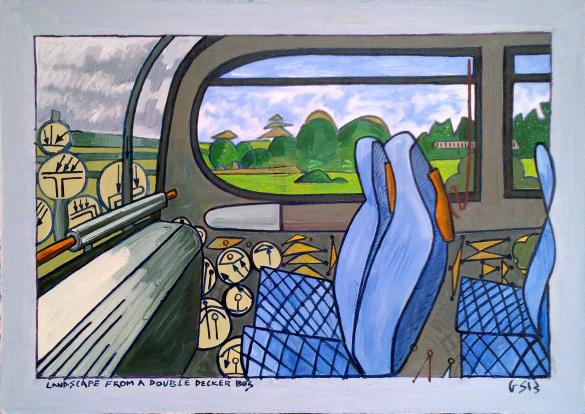 Landscape From A Double Decker Bus

Memories In A Landscape

Obstruction In A Landscape 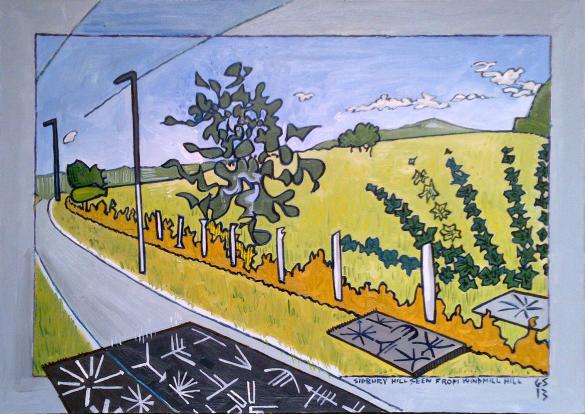 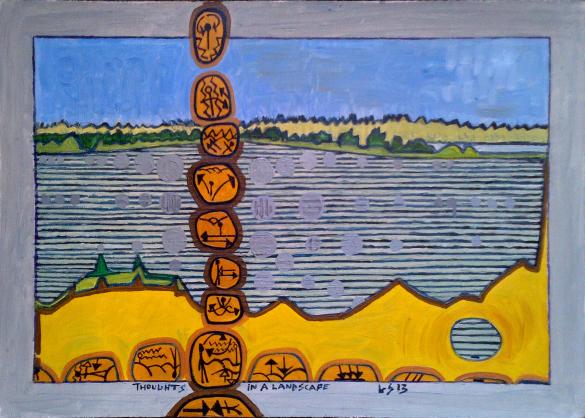 Thoughts In A Landscape 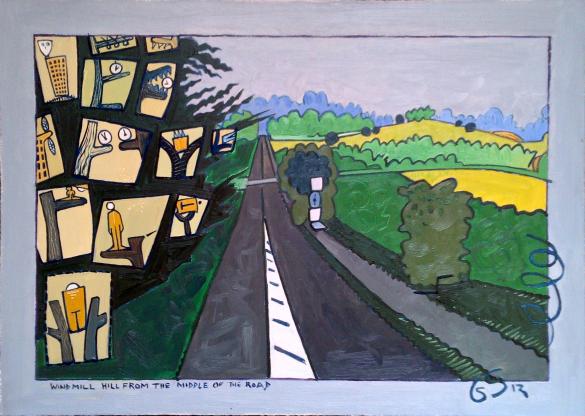 Windmill Hill From The Middle Of The Road